I hope that the President doesn’t mind me putting an entry in amongst his musings but it seemed to be the best place for this.

Close up: A Légion dHonneur medal.

As those members who were present at the regular meeting a few weeks back, Robert Hall has been honoured by the French Government with the Légion d’Honneur in recognition of his wartime service.  Peter Dawson has drawn my attention to an article that recently appeared in The Yorkshire Post following a ceremony to formally present the award to Robert and other Yorkshire veterans.  The whole article is well worth a read, but I think it’s worth reproducing one extract from it:

‘Robert Hall, 93, of Follifoot, Harrogate, was a Leading Aircraftman in a Royal Air Force mobile radar unit during Operation Overlord. He landed near Port-en-Bessin on the boundary between Gold and Omaha beaches on June 9 and was involved in the direct control of RAF fighter planes over Northern France as they moved along the coast towards Belgium.  Mr Hall told The Yorkshire Post: “I was only part of a very small unit so really I feel the medal I got was on behalf of the other chaps who were there at the same time.”’ 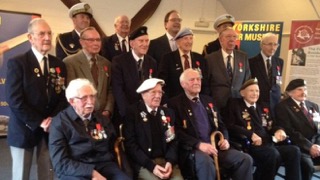 As someone who spent 27 years in the RAF and, thankfully, never had to go to war, I can only offer my respect and say that I feel humbled by such stories.