The Club’s Christmas Lunch at the Oakdale Golf Club turned out to be quite an event.

The Probus Club’s Summer lunch had been very successful, but no-one knew how members would feel about venturing out in the current uncertainty about Covid. I was thinking that maybe we’d get perhaps thirty folk who were able and willing to join in a social occasion. How wrong I was!

There was a slow start to booking, but registrations for the event (and the all-important food choices) only started coming in as the deadline approached, and still continued after that. I turned up early for the event expecting 49 people, and sure enough the tables were laid out for that number – all seemed sweet. 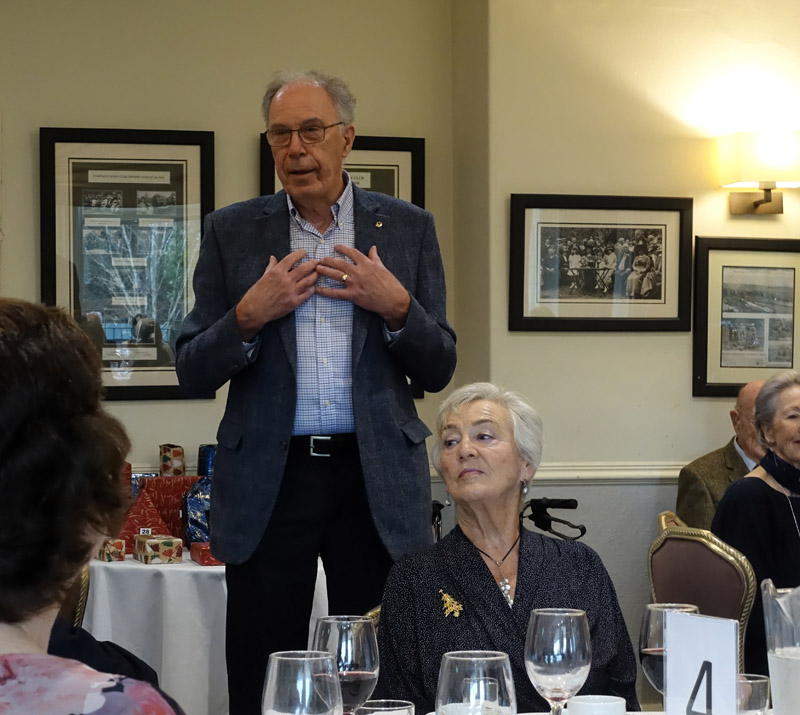 Then, half an hour to go. And the first few signs of an issue.

One, then two, then four people arrived who I wasn’t expecting! Don’t panic Captain Mainwaring!

It would later turn out that I had bookings from all of them – but had neglected to put them onto my master spreadsheet. What a boo-boo! Apologies are one thing – but what to do about it?

The excellent staff at the golf Club swung into action. Additional chairs at expanded tables. Changes in the kitchen. Drinks are served…

It all went well despite/because of my mistake. There was a fine buzz of conversation around the room.  People seemed to be enjoying themselves, and eventually I joined in too. There’s only so much you can beat yourself up about – I now believe……

The food seemed to be well received. Service was inevitably a bit slow, but the conversation didn’t seem to flag.

Stuart’s ingenious raffle was excellent – finishing off the event in great style and providing great prizes, many of them for the Committee (my mark of a good raffle)

The long lunch set a good target for the upcoming walker’s ‘no walk’ lunch at William & Vic’s this week. The current record is finishing at 4pm from a 12.30 start, so it will take some beating. We like a challenge!

[Webmaster’s note: For more pictures of the event, go to the Photo Galleries page here]